Lichens are so odd that it’s a challenge to put them in any group. They are often loosely lumped with mosses and liverworts into a plant category called “bryophytes,” yet they are not plants. These days they’re officially classified with other Fungi into a unique domain, yet they aren’t really just fungi either. [Review classification here.]

Because of these connections and confusions, and in honor of a new updated website at last, we’re branching out just a bit. Colorado Lichens now offers a little about fungi, mosses, liverworts, and other exciting but cryptic forms of life. We’re not experts on any of these, but we enjoy seeing and studying them, and we think they deserve more attention.

But what about the lichens?

However much we might like to think of lichens as unique beings distinct from anything else on the planet (and yes, they still are!), I’ve recently been reminded that they are, in fact, FUNGI belonging (most of them anyway) to the category ascomycetes. Perhaps it’s time to give a nod to lichens’ closest relatives, then, and add an exploration of colorful fungi in our forests that have been attracting my attention in recent years.

Who Are They, Anyway?

Lichens are some of the most fascinating creatures with which we share this planet. They occur in virtually all habitats and tolerate, or thrive in, a wide range of environments, from the arctic to the tropics, and from aquatic and marine to xeric conditions. Lichens have a host of specialized adaptations that enable them to survive long periods of apparent desiccation, resist high and low temperatures, and still function optimally whenever conditions become appropriate. Some have suggested that if there is life on other planets in our solar system, it may well be in the form of lichens. 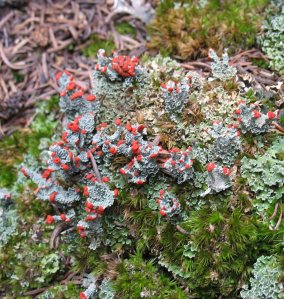 3 thoughts on “Welcome to Colorado Lichens!”