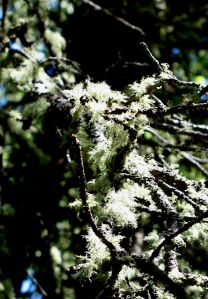 These may be the most varied— and most fun— of all lichens! Here’s where the world of lichens “branches” out into the bizarre and outrageous.

At least, that’s how it looks to me. You be the judge.

It seems pretty clear that crustose and foliose lichens are pretty much two-dimensional. They have length and width, but are, we might say, vertically challenged. Fruticose lichens are beyond all that: they may not even have an up or down. One wonders what they might look like growing in zero gravity! 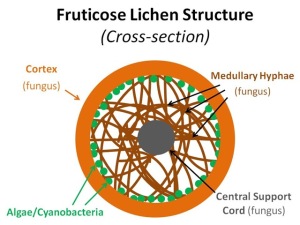 Fruticose means “shrubby,” and some of these lichens do, in fact, portray shrubs in model railroad layouts or architectural models. Structurally, they vary widely. They may be hollow or solid (as in this Usnea cross-section), but generally have upright forms. Most common here are species of Cladonia, such as “pixie cups,” and Usnea, the beard lichens. 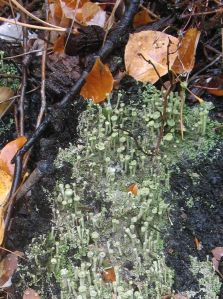 Cladonia species are abundant ground lichens in forest areas, forming colonies of graceful pointed or cup-shaped upright structures called podetia. Look closely at the base, where foliose parts of the lichen, the squamules, are often visible. Forms found on soils at lower elevations often go unnoticed because they lack podetia and consist only of squamules. Unlike the Usnea version in the diagram above, Cladonia podetia are hollow.

A species of Cladina forms a carpet of white under a young spruce tree. This genus is rare in Colorado; photo is from Maine.

Fruticose lichens may be the ones most apt to be noticed, and then given common names, by the people who share their environments. Where abundant, as in boreal forests and Arctic tundra, they simply can’t be overlooked; this view of Cladina in Maine is a good example. Colorado alpine tundra habitats are similarly lichen-rich, with some of the same species as found in the Arctic, such as “white worms” (Thamnolia vermicularis) and “Iceland moss” (Cetraria islandica).