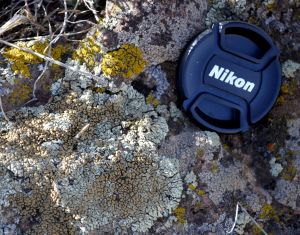 Lichens that grow on rocks are called saxicolous, and a great many species fall into this category. These are the bright splashes we see when out hiking or just enjoying the scenery. But did you know that some of them have distinct preferences in the types of rocks they grow on? Their occurrence is not haphazard; they need to find the correct substrate, and knowing the preference for a particular species can help you locate it!

The preference of lichens for a particular rock type can be based on chemistry: is the rock basic or acidic? Limestones, which are relatively sparse in our area, often support lichens that may not be seen elsewhere. Other species will be found on sandstones or the granitic or metamorphic rocks of our mountain areas. The cement of sandstones can be either calcareous (basic) or siliceous (acidic), which determines which lichens it will support.

For example, Xanthoparmelia species will generally be found on siliceous rock types, and thus are common in the granitic or metamorphic substrates so abundant in the Rocky Mountains and other places where igneous or metamorphic rocks dominate.

Bright orange Xanthoria elegans responds to environments high in nitrogen, and can often be seen in broad swaths below bird or rodent perches.

The same species seem to occupy both cement and granitic stone in this wall. S.L. White.

Lecanora muralis, a cosmopolitan species across the U.S., occurs on various rock types, also likes nitrogen, and often colonizes cement and mortar because of their high calcareous content. Because it appears on manmade surfaces, it has been called “stonewall” lichen (in fact, muralis is Latin for “of the wall.”) On the stone wall in my backyard, however, it appears equally happy on the granite cobbles as on the adjacent cement.

On this boulder of Fountain Sandstone, lichens are assisting in the weathering of the rock by exfoliation, or spalling. Photo by S.L. White.

Lichens also help break down rock, as we learned when we were young. Their chemical and physical interaction with the substrate on which they grow can be significant. Crustose lichens, in particular, closely interact with their substrate and are so abundant they play a significant role in weathering processes.

Direct penetration of rhizines, in the case of foliose lichens, or medullary hyphae in crustose lichens may physically fracture rock surfaces. Once imbedded within a rock, expansion and contraction of lichen thalli with changes in temperature and hydration status will contribute to the pressures that result in surface disintegration of rocks.  —Nash et al., page 153

1 thought on “Lichens and Rocks”